Hello, possible new friend! I’m Frea O’Scanlin, and I sometimes pretend to be a writer. I’m generally sleep deprived and make little sense, so enter at your own risk. My LJ contains some stories, of course, but if you want to read more (as this seems to be mostly Avengers and crossovers at the moment), make sure to read over at my AO3 page or my ff-net page.

So I’ve put this post off for a couple of weeks because I had a lot of different stories going on in different exchanges and I’m still kind of amazed at all of the stuff I managed to write in December and so far in January (one exchange fic and one birthday present to go and please nobody request anything of me because I can literally feel the writing well drying up and I want to go hide for awhile). But I’m guessing it’s pretty common to write about what you wrote for Yuletide, so here we go.

Sorry I haven’t been present much apart from posting writing. I’ve had headaches basically every other day and the lack of a garbage disposal is actually disrupting my life more than I realized it would. Also there are things going on in my apartment that are kind of annoying, so I basically have either two weeks to find a new apartment and move alllll of my stuff or I need to nag my super into fixing everything. My dad wants me to move, but I just...that’s a lot of work. Meh.

Anyway, how’s everybody else?

Title: Against the Pale
Fandom: The Avengers, Antarctica AU
Rating: PG
Warnings: None
Pairings: Peggy Carter/Steve Rogers
Characters: Steve Rogers, Peggy Carter, Howling Commandos, Crimson and Clover
Word Count: 829
Summary: Her lipstick seemed really bright against her skin, but Steve liked that. In the constant daylight of the SHIELD base, everything was far too easily washed out, but Peggy’s lipstick remained a slash of color.
Author’s Notes: This was written for the fantastic

Title: Let’s Go to the Mall!
Fandom: Chuck
Rating: PG-13
Warnings: Violence, some swearing
Pairings: Chuck Bartowski/Sarah Walker
Characters: Chuck Bartowski, Sarah Walker, Hank
Word Count: 2662
Summary: It’s supposed to be a normal day at the mall. Normal for them is not normal for everybody, though.
Author’s Notes: Putting this here for archival purposes!

Currently I'm hanging out with the best friend and the best friend's new(ish) attachment, which is my awesome nephew (the Dragonlet). He's over in the corner playing with his race cars and making "vrooooom" noises and occasionally shooting over devastatingly charming smiles. I've been here since Friday, when I got to meet up with my beta Max for a couple of hours at an In-N-Out near the San Jose airport before Best Friend and the Dragonlet came and picked me up. We went into San Francisco for a couple of hours, wandering around the wharf and stopping to see the Golden Gate Bridge before we went back. I got to eat Fish'n'chips.

Yesterday and Saturday we wandered up and down the coastline. I got to see the redwoods down at Big Sur and we explored some of the beaches in Monterey, as well as the pier where there were a bunch of sea lions just lounging on the rocks next to the black birds that have a name that start with "C" but I've just started calling them "Sea Ducks." There are a LOT of pelicans here. A LOT. 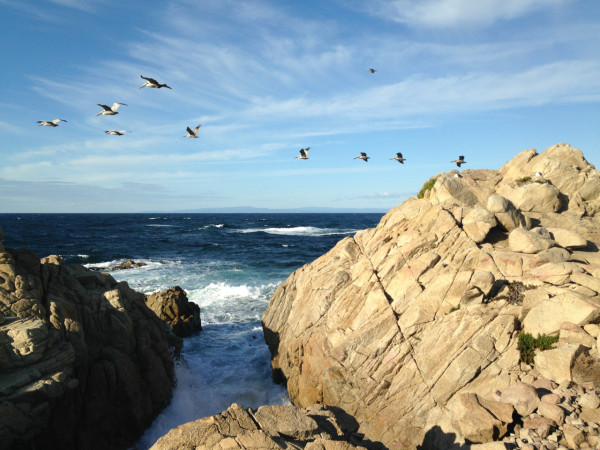 Today we're going to the Aquarium, and it should be a blast. Sea creatures and dragons, oh my!

Oh, if you want to leave me gifts, I signed up for Fandom Stocking this year. Feel free to leave me banter and icons and all sorts of cool things here!!

I'll be back into the normal swing of things on Wednesday. What's up with everybody else?

Title: Smoak and Honor
Fandom: Arrow
Rating: PG
Warnings: None
Pairings: Oliver Queen/Felicity Smoak
Characters: Felicity Smoak, John Diggle, Oliver Queen
Word Count: 540
Summary: It’s a silly rite of passage.
Author’s Notes: Putting this here for archival reasons. A little backstory: this is an Arrow AU of a fic I wrote three years ago, called The Wingman. It involves Morgan Grimes battling against Daniel Shaw in a Guitar Hero-type game on Chuck’s behalf so that Shaw can continue shopping in the Buy More. I wrote it in the space of a night and still wonder what was wrong with my head.

Title: The High-Velocity Helicarrier Hotel
Fandom: Arrow, The Avengers
Rating: PG-13
Warnings: Some violence, minor character death (comment for details)
Pairings: Felicity Smoak/Oliver Queen, background Natasha Romanoff/Clint Barton
Characters: Felicity Smoak, Oliver Queen, Natasha Romanoff, Clint Barton, John Diggle, Kate Bishop, Thea Queen, Bucky Barnes
Word Count: 9875
Summary: SHIELD could really use some hospitality tips. Or, the fic where Oliver and Felicity escape from the Helicarrier, with the help of their team and some new friends.
Author’s Notes: The long-awaited sequel to Bad Altitude is now here! After being thrown in a SHIELD holding cell, Oliver and Felicity aren’t terribly interested in sticking around and seeing what SHIELD has to offer. Thankfully, Natasha has a plan.

Other Stories in the Badass Altitude Universe: Bad Altitude || They Speak Russian

Still alive. I dropped out of Nanowrimo to take care of myself because I felt like adding additional stress to my life would only be bad and I’ve pretty much proven I can write for the rest of the year, anyway. Nanowrimo is great, but if you write year-round, it’s not much but a bunch of people trying to motivate you and telling you to write. My contrary nature really, really doesn’t do well with that.

Next month, I’m taking trips to California and Chicago. I’ll be in northern Cali for a few days, where I’ll get to see my two best friends, and then in Chicago, so if anybody up there wants to meet up for coffee, let me know.

Fandom-wise, I’m starting to like Agents of SHIELD a little, though they have a while to go before they can be considered a good show. I’m still for jettisoning half of the cast, but now instead of Melinda May as the main character, I’d accept Jemma Simmons. Arrow continues to be my favorite, and if you’re not watching Brooklyn Nine-Nine, it’s hands down the best new show of the year.

In honor of All Hallow’s Eve, I’m inviting trick-or-treaters to my ‘door.’ Comment “trick-or-treat” to this post and…well, you know the drill. Treats can be anything that strikes my fancy (pics of fave actors or pairings, one sentence fics, graphics, a few words why I’m glad to have you on my flist, etc. etc.). The more “houses” to visit the more fun it’ll be, so go ahead, open your journal and help spread the fun!

I've enabled anonymous commenting for my Twitter buddies. If you could let me know who you are, I can tailor your treat—or your trick!—just for you (aka sign your comments if you can!).
Collapse